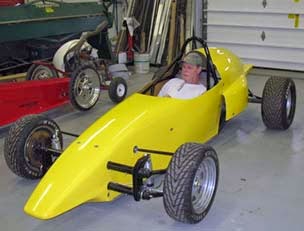 SGCC was started in early 2007 in Dallas Center, Iowa. The idea was to produce high quality motor vehicles that would be marketed and sold to customers seeking unique forms of transportation. Since then, SGCC has built and produced many custom, race and kit cars. They focus on research and development to provide their customers with custom automobiles that are interesting and that provide driving comfort and excitement.
Sugar Grove Custom Cars, LLC., is the proud owner of the designs and tooling used to produce the M-5 Formula First Race Car. The design and tooling originated from Kurt Lemay at Mysterian Race cars. Most people familiar with the name Mysterian know that over the years Kurt's designs have won many championships including the SCCA national runoffs.

The M-5 is the latest in a very successful series of race car designs that feature beautiful, elegant body lines, simplistic construction, and superior craftsmanship.

They feel that the Formula First class is the most exciting new formula car class to come along in some time; its unique combination of affordability, performance, and close racing will make it one of the fastest growing formula car classes available.

SGCC made several adjustments to the prototype and proudly entered the M-5 in it's first-ever race, the opening round of FormulaCar Magazine’s 2008 Formula First Challenge Cup Series. The first race of the Cup Series was held April 4-6th at Roebling Road Raceway, located near Savannah, Georgia. Scott Meyer, in SGCC's M-5, captured pole position and finished in second place, beaten only by the reigning 2-year champion, Greg Rice.


The driver of their M-5, Scott Meyer, wrote this message:
"Congratulations to Greg for a great drive to the front. I think it is going to be a long year for the rest of us. Also thanks to Jim, Mike, and Jarb from Sugar Grove Custom Cars, they were brave enough to let me drive the M-5 after purchasing it from me. Prior to this weekend I had only logged 12 laps in the M-5. I have to say that it is the best handling car that I have ever driven. It is a very fast car right out of the box. Kurt LeMay deserves a ton of credit for designing such an awesome car. Sugar Grove will be working on many improvements to the car including removing the engine fan and blue printing the motor."


They will continue to work toward finishing this car and getting the proper SCCA paperwork. Soon after that they will be able to price kits and/or complete cars. Assuming that all goes well, SGCC will have a production schedule of four frames per month.  During prototype development, jig tables and tooling were set up to support the production of a consistent, high quality frame. This car has a yellow gel coat, but actually they will be able to offer 60 base colors and even custom gel coat colors.


SGCC is looking forward to being an active part of the 2009 Formula FST racing scene.