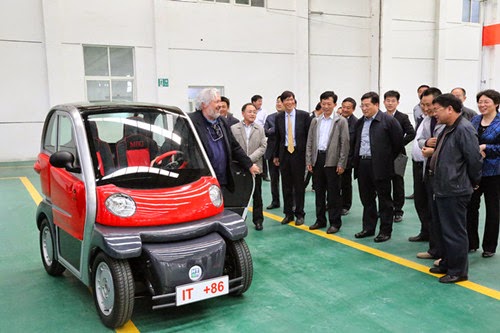 Italian HTM company was founded in 1997. The company's main business is the development of a new generation of electric road vehicle, and began to develop and apply advanced motor and Controller. One of its primary founder, Mr. Alessandro pavoni is the pioneer in the industry. He began to study electric cars from 1978, and in 1986, he developed a manned digital power and control system for electric vehicle, he then developed the first electric bike and scooter electric three - wheeled prototype in 1992.
In Italy, HTM passed the authentication of the Italian Ministry of Transport, being eligible for the production of electric four - wheel vehicle business, the development of a light four - wheeled electric vehicle city7.0 passed 92/61/cee authentication, as a road motor, city 7.0 has become one of the Italian government procurement models, has this year for Italy, HTM already supplied over a thousand of for electric four - wheel postal motors for Italian Post Office this year.
HTM senior electronic engineer and mechanical engineer with more than 20 people, and in the Padova universitycooperation of electric vehicle technology. HTM company by virtue of the company's products and technology advantages to win the 1998 Lisbon Expo 800 electric cars exclusive supplier qualification. The 2000 Hannover World Expo, HTM successfully copied the experience, exclusive supply 1000 electric cars, of which 400 cars for the 4 round of the light electric vehicle.
China Chinese electric car H